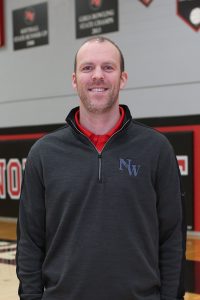 Head coach Ryan Carroll enters his sixth season at the helm for the Northwest Girls Basketball program.  Carroll has a career varsity record of 99-39.  After a challenging first season under Carroll, the Mounties have won 19, 22, and 13 games the past three seasons respectively.  The Mounties have won a district title 3 of the past 5 years, and a conference championship in 2014.  Carroll was named Jackson Citizen Patriot coach of the year in 2014.

Coach Carroll expects a young, developing group to continue to compete for championships this season, and the coaching staff is very happy with the growth shown so far.

Carroll graduated from Wauseon High School in Wauseon, OH.  He continued his playing career at Spring Arbor University in Spring Arbor, MI.  Carroll received a Bachelor’s degree in Business Administration in 2003.  He is the proud father of two amazing children, Emersyn (9) and Brexon (6).