Mounties Official Sponsor
2001 was the last time the Northwest Varsity Volleyball team won a district championship…until last night!!!  In their home gym surrounded by family, friends, and super fans, the Mounties were focused on “putting numbers on the wall” and they did just that!  With a pre-game speech that included lyrics from Eminem and inspirational words about “Grit” and “Strength in Numbers” the Mounties were prepared to keep their winning streak alive.  In a very intense and competitive match against Okemos High School, the Mounties struggled right out of the gate in the first game falling behind 4-1 before Brooklynne Bevier served 11 consecutive points.  That was the momentum the Mounties needed to carry out the win in game one.  In games two and three the Mounties found themselves trailing on the score board due to missed serves and poor passes, however they found their groove and gained back the momentum to seal the win in game four.  Coming down to a final and fifth game the Mounties came out strong and never looked back.  You could feel the energy and excitement in the gym rising as the score reached 12-9 and then the final whistle blew…indicating a DIVISION 1 DISTRICT CHAMPIONSHIP for the first time in 18 years!
The team of 14 players and four coaches displayed grit and grace the entire week to earn that moment!  It was a night to remember for everyone in the gym.
Stats on the night include:
Henly Sleight – 15 kills, s aces, 2 blocks and 10 digs
Mary Crowley – 4 digs
Layne Sleight – 5 kills, 3 aces, and 14 digs
Madison Neitzke – 17 digs
Cassie Jakubus – 1 kill, 2 blocks, 2 assists
Jozie Bontrager – 8 kills, 3 blocks
Brooklynne Bevier – 16 kills, 3 aces, 2 blocks and 9 digs
Mallory Anspaugh – 5 kills, 36 assists, 2 blocks, and 11 digs
Bree Burman – 6 points (game changer in the final game) and 6 digs
Tejah Kapp, Chloe Cooper, Peach Kennedy, , Jillian Osterberg, and Abbie Sczkykutowicz –  best hype girls ever!
Regional action kicks off Tuesday at Battle Creek Lakeview as the Mounties face St. Johns High School at 5:00 p.m.  Make plans now to be there Mountie Nation! Your support means so much to us!  Go Mounties!!! 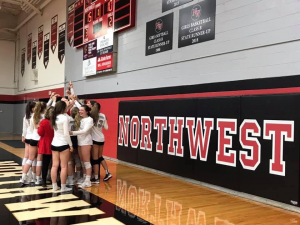 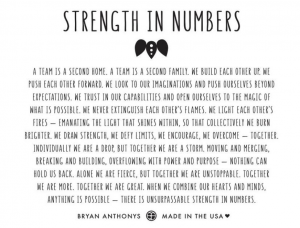